The black bear is an intelligent animal with keen senses of smell and hearing. It can detect the slightest aroma of food, which may lead the bear to campsites and near homes. Odor from carelessly stored food and garbage can lure bears long distances.

Black bears are generally shy and secretive and usually fearful of humans. However, if they regularly find food near houses and areas of human activity, they can lose their fear of humans. Unlike grizzly bears, black bears are seldom aggressive toward humans.

Thoroughly clean grill at the cabin after cooking.  Bears are attracted to the smell of meat.

Are black bears dangerous?
Yes. Black bears are capable of killing people, but it is an extremely rare occurrence. Black bears, like all wild animals, should be treated as unpredictable animals. Campground or “panhandler” bears may nip or cuff people that tease with food or crowd around them. In the woods, black bears usually retreat before people are aware of them; normal trail noise should alert bears to your presence.

What should I do if I encounter a bear?
If you see a bear, keep your distance. Make it aware of your presence by clapping, talking, singing or making other sounds. If you get too close to a bear, it may slap the ground, huff, blow and chomp its teeth or rush you (this is referred to as “bluff charge”) in an attempt to get you to move a more comfortable distance away. If this occurs, maintain eye contact with the bear, speak in a soft, calm voice and slowly back away from the bear. These actions will help appease the bear and show that you are not weak, but, at the same time, not a threat to the bear. Do not run, avert your eyes or turn your back to the bear. The bear may perceive weakness and enforce dominance. The bear’s bluff charge and chomping of teeth are a defense mechanism to establish the bear’s dominance in an encounter with humans or a more dominant animal in the wild. Bears can outrun, out-swim and out-climb you. If you are attacked by a black bear, you should fight back rather than “play dead.”

When do bears den? When will they come out in the spring?
“Do bears really hibernate”?  This is a common question. When answered “yes”, many people next ask, “do they really hibernate in North Carolina, or is this just a northern behavior”?  Well, the answer is that bears hibernate throughout North America and certainly in North Carolina.  However, the process is very different from what is considered “normal” hibernation exhibited by rodents and bats.

To understand this issue, we first need to define the process of hibernation.  In its simplest definition, hibernation is a specialized reduction in metabolism brought about by low food availability and/or low temperatures.  Several body changes can occur during hibernation.  These include lower heart rates, constriction of blood vessels, suppressed shivering, reduced breathing, and lower oxygen consumption.  Another process common during hibernation is known as adaptive hypothermia.  This is a process by which an animal lowers its body temperature in order to conserve energy.  Different species may utilize different degrees and combinations of the previously mentioned metabolic processes.   Many species of rodents and bats drop their body temperatures very dramatically, some to near freezing.  Bears on the other hand only drop their body temperatures by 10-15 degrees in most cases.  As a result, bears are somewhat wakeful sleepers and are capable of abandoning a den if seriously disturbed whereas many rodents are so deep in hibernation that they can be handled without waking.

Most hibernating mammals, such as woodchucks (ground hogs to most North Carolinians), must arouse from hibernation periodically to feed, urinate, and defecate.  Herein lies the main difference in bear and rodent hibernation.  Bears have the ability to remain stationary for longer periods than rodents without feeding or eliminating waste.  In northern areas of the U.S. and Canada, bears hibernate as long as 8 months without moving from their den.  In the South, bears exhibit the same characteristics, only for shorter time periods.  The build-up of waste that bears somehow process would kill most animals if they did not arouse from hibernation to handle normal bodily functions.  Furthermore, the long periods of inactivity would result in degradation of bones and muscles for non-hibernating animals.  Bears however exit their winter dens strong and healthy after long periods of inactivity.  Whatever you call the process in bears, it is a truly remarkable physiological achievement.  Medical doctors are attempting to understand bear hibernation better in order to help patients suffering from kidney dysfunction and bone degradation.

What about bears in North Carolina?  Based on hundreds of radio-collared black bears studied across the state, we know that the vast majority of our bears hibernate. Females typically hibernate longer than males.  North Carolina’s bears just do it for shorter time periods than their northern cousins.  Bears studied in eastern North Carolina by radio-telemetry entered dens as early as November and as late as January.  These same bears exited dens as early as February and as late as April. This results in the possibility of bear sightings and roadkills in all months and the misconception that coastal bears do not hibernate.  Only human disturbance interrupts these periods of hibernation in North Carolina’s bears.

Female bears give birth during hibernation and nurse their cubs through a period of helplessness.  The female “hibernates” throughout the entire process, and unless disturbed, she will not leave the den until she brings her cubs out of the den in the spring.  By that time, the cubs can walk and follow the mother as she feeds.

The next time someone says black bears do not “hibernate”, please tell them that whatever you wish to call the process, bears do enter a long period of physical inactivity and exhibit some amazing physiological responses to low food availability and temperatures.  In many ways, their ability to hibernate for long periods without feeding or eliminating waste is more advanced and remarkable than what has been considered “normal” hibernation involving periodic arousal to move about and feed.

When are bear cubs born?
Cubs are born in winter dens during January after a gestation period of about 8 months. Newborn cubs are born hairless, with eyes closed, measuring 6-8 inches in length, and weigh less than 1 pound. Cubs stay with their mother for approximately 18 months and den with her again during the following winter. When they are a year and a half old, cubs leave their mothers prior to the June/July mating season. 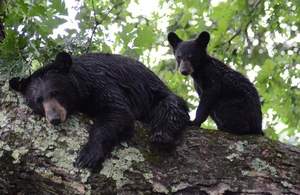 What should I do if I find myself around a mother bear with cubs?
Mother bears are rarely aggressive toward humans, but they are protective of their cubs. A mother bear will usually give many warning signs (huffing or popping sounds, swatting the ground or even bluff charges) to let you know that you are too close. Move away as described above.

What good are bears?
Throughout history, humans have always been interested in black bears. They occupy many places in our culture — from Native American ceremonies to Teddy bears. Bears have a very positive impact on our environment. Because bears need a variety of habitats to thrive, managing habitat for bears benefits many other species. As a result, bears are a good indicator species of healthy wildlife habitat. If a habitat supports bears, it will support many other creatures.

The bears themselves affect the ecosystem in a multitude of ways. As predators, they help control deer and moose populations; as scavengers, they help clean up carcasses; in their search for insects, they act as nutrient recyclers; and by eating a variety of fruits, they help distribute and sow fruiting trees and shrubs which are used by other animals.

Bears also hold some secrets that are worthy of study — such as the ability of denning pregnant female bears to shut down their digestive and excretory systems and still deliver and nurse as many as 5 cubs. Bears also have significant economic value in many parts of the country; hunters, photographers and wildlife enthusiasts all spend significant sums of money in order to hunt or view bears. Hunters utilize harvested bears as a highly prized source of food. Bears enrich our lives in many ways and provide many useful functions. Perhaps the most important function is the knowledge that if you live in an area that can support a healthy bear population, that area is also healthy enough to support you.

What our Guests are Saying!

NO Pets & NO Indoor Smoking

While we love pets, we cannot permit them at our properties.

We also request all smokers to light up and smoke outdoors.